There have been occasions where people have travelled from Sal to other islands for a few days, but because of poor weather conditions while on the other island, they have been unable to return to Sal when they had planned.

If your travel arrangements are disrupted you may need to liaise with your tour operator or airline regarding any alternative arrangements.

Inter-island airline operators have been know to cancel flights or ground planes in bad weather. Make sure you have some onward travel document copies with you in case of delays so you can contact airlines and travel agencies. Occasionally people have missed their international flight due to not being able to return to Sal Island or another international airport in Cape Verde, in time for their departure from Cape Verde.

If there are a number of flight delays there may be other people also hoping to get back from another island in time to get an international flight. However occasionally international flights have been disrupted too, such as when the volcanic ash in Iceland caused disruption some years ago.

Some of the islands will see more cloud and rain than others. It doesn't rain a great deal on all the islands hence the dry and barren landscapes you see in many images, though these are not the images that tour operators would prefer you to see. The photo below is of rain clouds over Sal Island in February 2016. 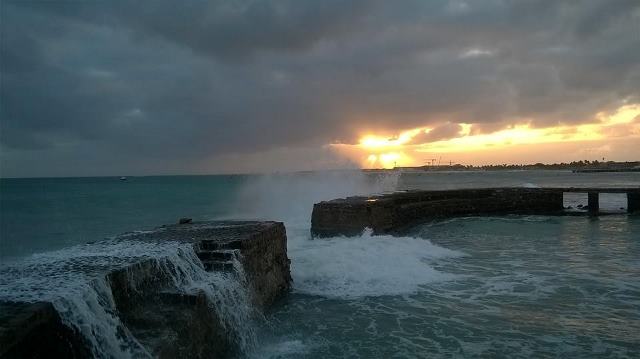 There are very few hurricanes that reach the islands, though in August 2015 a big storm caught many fishermen and sea going vessels off guard. A number of boat owners hadn't expected the storm to hit the islands, as normally they pass Cape Verde, but on this occasion there was considerable damage.

The islands with mountainous terrain receive more rain than the flatter islands of Sal, Boavista and Maio. If rain does fall it can fall on some parts of the islands and not others. Rain can fall at any time of the year, but more so at the end of the summer. Winds from the sahal can reach Cape Verde and blast you during the winter, dust storms form and disappear with the occasional mini tornado of sand and dirt swirling its' way across the islands on flatter ground. The dust storm can take place at other times. As recently as January-2017, a few international flights could not land on one island because of the amount of dust in the air.

The rain can fall fast and furious but doesn't often last long. There may be many more cloudy days than you expected in Cape Verde, but you will still burn through the cloud, those that do not wear sun protection beware!

SHORT VIDEO: WHEN IT RAINS IT RAINS

If you have bookings for services or tours on such occasions, then service providers may, if or where possible, make other arrangements or offer a part or full re-fund in certain circumstances. Bookings for bbq's, beach ceremonies or other activities may need to be re-arranged.

SHORT VIDEO: JOAO TAKES KIDS TO THE BEACH IN THE RAIN