Main photo above of Josh Angulo making speech in 2009 Competition.

An interview with Josh Angulo.

Feb 27th 09: Following Josh’s win at the 2009 World Windsurfing Championships at Ponta Preta, I went to meet with him to ask about his plans.

We sat on a bench at Josh’s windsurfing centre and snack bar which is situated on the beach, on the east end of Santa Maria village. We both looked out over the white sandy beach to the blue sea watching windsurfers and swimmers taking time to enjoy the warm sunny climate. 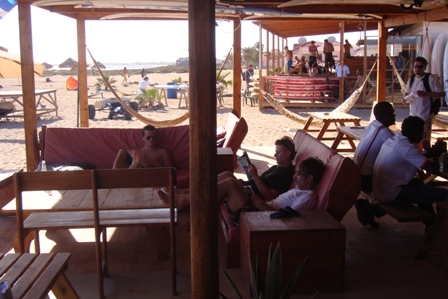 Josh was the key person in bringing this event to Sal 3yrs ago. Josh says “It had been a tough but fulfilling road since the preparations started for the first event in 2007. Each year more time and effort had gone into work behind the scenes, it’s been getting better each time. Every year the event grows, this year even more people competed from various parts of the world and this brought more national and international media coverage”.

“There were a number of hick-ups but everyone involved put a lot of effort into the event prior to and during the competition week. For the time being at least, everyone including myself is taking some well earned rest, and then maybe in a month we will get together and reflect on how it went”.

“The competitors had their own problems to overcome including broken equipment and clashes with the rocks” said Josh. “I had prepared myself well for the competition, in both mind and body, so I felt good”. He went on to say “the support I always get from the Cape Verdean people is fantastic, it’s great that my family and friends are there too”.

My family support me in many ways, obviously I visit Hawaii and see my family and daughter over there, and they have also been over to Sal and love it here. These days I now make sure my lovely wife Claudia, who is from Sal and son Noah are able to meet up with me whilst I am on tour, or that I have time to drop back into Sal. I try and meet up with them at least every two weeks”.

What about Noah? “ Noah’s a ‘little ripper’, he’s only 4yrs of age but he knows all the moves already, he’s too small to windsurf but he loves body boarding, just like I did when I was a young boy in Hawaii”.

Where will your tour take you this year? “I shall be away for around a total of 6months and competing in countries such as Austria, South Korea, Spain, Turkey, Germany, Portugal then possibly Scotland and Venezuela, but these have to be confirmed. I leave for Hawaii in March but my first competition is not until May in Austria.”

In all the places you have competed around the world, where were your biggest waves?” Hawaii and Ponta Preta, Hawaii has more currents but Ponta Preta has the rock factor which is more dangerous”.

What about next year’s event being held here again on Sal? “Well, the Government only give us a one year contract for the event, but hopefully this will be granted again for next year”.

Will the building of developments interfere with the wind route that helps make Sal one of the best places to windsurf? “ There are no official ‘protected wind routes’ for water sports on Sal, the one that people think is a protected wind tunnel that comes across the island from Salinas to Ponta Preta is more of a ‘sand route’. For sure the Government needs to protect the land and wind routes which are natural occurrence across the island, but they must act now, if construction takes place for example on the south east coast it would affect the wind flow across Albatross (Ponte Leme) where a number of wind and kite centres operate.”

Personally how do you feel about life here? “I feel blessed and am happy with what I have, for myself and with my family and business. I would wish others to be blessed too”.

Thanks to Linda Aspden, Corinna and Calu for photos of the events. More in Picasa Photo Gallery.

Windsurfing is very popular on Sal, more so than surfing. The winds that blow across the islands attract windsurfers from all over the world, especially between December to March/April.

PWA WINDSURFING TOUR - Cape Verde 08 :
Runner-up Angulo was instrumental once again in organizing this event, ‘I’m glad we got this event together again. It means everything to me to have riders of this quality here, plus I’m happy for Kauli as he’s an exceptional sailor, so I’m just looking forward to seeing the contract signed to have the PWA back in 2009.’ Pease view some of the photos within 'Picasa' in the Photo Gallery.

The event which became a two day event this year but attacted windsurfers, other sports enthusiasts, locals and tourists to support and watch these athletes perform.

I would suggest you check out the action at www.pwaworldtour.com to:

Or, for more information, please contact the PWA office via info@no-spam-pleasepwaworldtour.com