Gerda is from Holland and having lived in Norway and spent time in Niger with the Tuareg she decided to build a house on Brava, one of the smaller islands of Cape Verde. It was very brave and the house is lovely but now it is up for sale as it was just too remote.

Gerda is now living on Fogo which is a bigger island with better transport links and facilities. She has a cat called Felicia and is currently renting a house from an English expat, Sarah Litchfield. The house is rustic, about six kilometres uphill from the main town Sao Filipe in area known for its agriculture especially the prized 'congo beans' that Fogo is famous for. Day to day life is not that much different to ours in the UK as you will see from Gerda's blog. She had been living at another place on Fogo but has decided to make the move to 'Casa di Sara'. Just look at the view from Casa di Sara garden this morning with the island of Brava in the distance.

Although I liked the Round House in Alvito on Fogo Island, I decided I had to look for something else. Something cheaper. I emailed Sarah and we agreed that I would come and live at Casa di Sara opposite Cerrado, one of the big old Portuguese estates, near Lagarica. It is very peaceful, rural and with amazing views over to Brava. 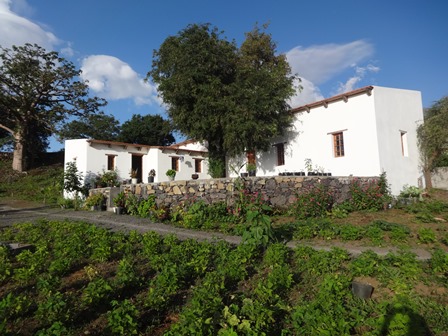 Getting the house ready

We agreed that Sarah would come to Fogo for some weeks to get the house ready and show me how things work. It is off-grid with a solar system so I just needed some pointers on that and other day to day necessities like local transport, meeting my neighbours and where the local shops are. Sarah has been living there on and off for five years and local knowledge is invaluable here.

So I started packing. Amazing how many things you have...I had to find a solution for the transport of everything. I asked Nelito - a neighbour who has an aluguer (mini bus or truck) to help me.

He came on the time we had agreed, (great!! - very un-capeverdean! !) and even brought a friend to help with loading everything (very cape-verdean) . Sarah was there to help us unload and between us it didn't take long . I went back to Alvito for my last night and to arrange another trip with the last things.

The next day I had to catch Felicia ready for the big move. Fortunately, I could put her on a lead . Unfortunately she managed to escape. I suppose she understood there was something going on and had become suspicious. I tried to find her, calling her name. Nothing.

Nelito was on time again the next day and just five minutes before we left Felicia showed up, followed by a friend of hers. Probably they had to say goodbye to each other. So Felicia went into a box and off we went. Felicia obviously didn't like being closed in, but when we reached Casa di Sarah and unloaded everything I put her on the lead inside. It was cool and calm and just what she needed to get over the trip.

I worked hard over the weekend. Sarah had gone hiking up in Cha das Caldeiras with friends for a couple of days so I had the place to myself to arrange all my souvenirs and furniture from Africa which fitted beautifully into the house and in no time it felt like home. 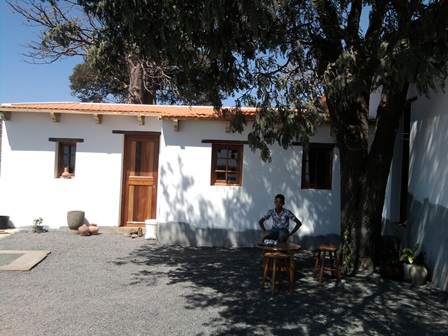 Sarah returned on Sunday night and we spent a week together, talking a lot about our lives in Africa and the advantages and disadvantages of living in Cape Verde, relaxing on the terrace under the shade of the big tamarind tree. And working hard as well! The house had not been inhabited for several months so we needed to sweep, clean and get rid of two very big rats! The ants I decided to live with as I didn't want any insecticide down because of Felicia.

During that week Felicia was on a lead for a few days and then set free. She found everything very interesting and exciting. Soon she would find out this place is a mouse paradise. She soon brought a mouse into the house. She let it go and chased it. I tried to ignore and sleep again but when the mouse sought refuse in my bed I had to do something.

Felicia needs some expert mouse training - she is not quick enough and the mouse escaped. I was also involved in the chase - how fast mice can run !! And how smart they are! We chased it all over the house - I never knew they can jump as well. When finally it hid between two cushions I could squeeze those together and put the little rascal outside. This adventure is repeated more or less every night. So I designed a mouse trap. An empty olive oil can of which the lid is off, put on its side with the open top invitingly on the ground. When the mouse tries to escape it wants to hide somewhere; for instance in an empty olive oil can. When it is in you only have to cover the opening and free the poor thing out-side. It works quite well. This confuses Felicia a lot. She cannot understand how her prey suddenly vanished as if by miracle. She keeps searching a while but by then I am already fast asleep

We have been here more than three weeks. The garden needs watering. Then it will be soon very lovely again.

I have been working to clean as much as possible and a local boy comes to help. I still have to get used to the isolation a little bit but Felicia is quite at home. She seems convinced that the birds in the large tree will wait for her when she is climbing to the top. She is disappointed each time but she does not give up.

I enjoy the spacious views and especially the sunsets and think about the future.Cape Verde or back to Europe????What about Felicia? Luckily I have time and peace to reflect...