It's carnival time in Mindelo, Sao Vicente - by P.Pritchard

It's carnival time in Mindelo, Sao Vicente - by P.Pritchard

A number of regular visitors to Sal had decided to go to Sao Vicente for the carnival this year. The trip was organised by Tracey who works for a tour operator on Sal (but who is also a friend to all those going) .

We'd said it would be great to go in a group, a great opportunity to go and see a few other islands as well as attend the carnival with people we knew. We made necessary arrangements and met up to discuss the trip with everyone and be given our flight tickets a few days before we were due to fly to Sao Vicente.

The origin of Carnival is a Western Christian festive season that occurs before the liturgical season of Lent. The main events typically occur during February or early March, during the period historically known as Shrovetide (or Pre-Lent). Carnival typically involves a public celebration and/or parade combining some elements of a circus, masks, and a public street party. People wear masks and costumes during many such celebrations, allowing them to lose their everyday individuality and experience a heightened sense of social unity. Excessive consumption of alcohol, meat, and other foods proscribed during Lent is extremely common.

We were picked up from Melia Dunas hotel reception on Sal at 8am on Saturday 25th February 2017 in a minibus, our cases placed in a caged trailer at the rear, then off we sped to Vila Verde to pick up other members of the group, then we were joined by a second minibus with other members of the group from Santa Maria and all headed off to Amilcar Cabral International Airport where we took an internal flight to the island of Sao Vicente. Here we are, a colourful bunch! 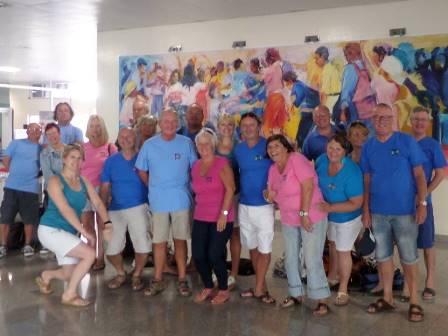 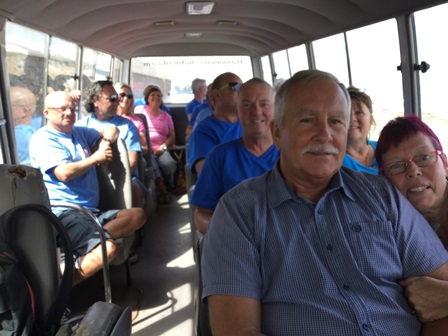 We unpacked and walked to a nearby Irish Sports bar (Simpatico Bar Bistro) for Lunch. The afternoon was spent exploring the sea front and getting our bearings. There was a pre-booked meal on the first evening at El Gout, which was very nice and complemented with live music, then back to the Hotel for a nightcap and Bed at the end of a long interesting day. 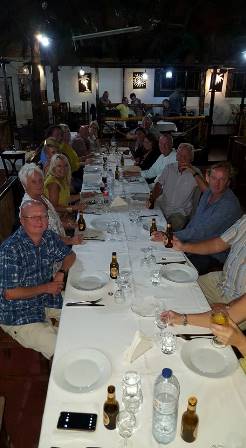 Breakfast early on Sunday the second day as there is a tour of Sao Vicente, picked up 9am by our great tour guide Edson who spoke excellent English. First seeing the Sea front at Mindelo, then off to the Golf Course, which had a spacious Club House, containing many trophies and photos from its ‘Hey Day’. Off over the hills exploring the coast line with ample stops for us to get out and take photographs. Stopping for Lunch at an excellent restaurant in Baía das Gatas. 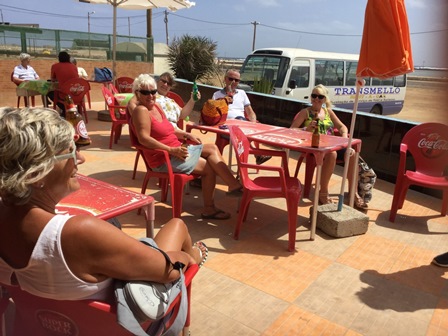 After this excellent lunch we boarded the minibus to go to the highest point of Sao Vicente. The stunning views from the top were well worth the navigation up the narrow winding and sometimes steep drop at the side, but not for the ‘Faint at Heart’. The tour guide gave us the opportunity to alight part way up while it was not so steep and be picked up on the way down. 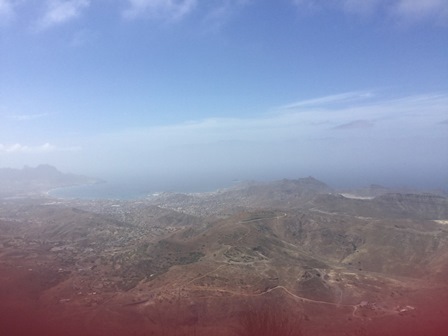 Then back to Mindelo Simpatico Bar to watch the England Vs Italy six nations Rugby where England won 36 – 15 points. This was followed by Manchester United beating Southampton 3 – 2 to win the EFL Cup at Wembley Stadium.

Back to the Hotel, navigating Carnival practices, to get ready and eat at an excellent Italian Restaurant (Taverna) just next door to the Simpatico Bar, with good company returning to the Hotel for a quick nightcap, then bed, as we have an early start the next morning. A very satisfying day all in all.

The next day we'd planned to visit the island of Santo Antao and take tour around the island. The trip to Santo Antao will be covered in another blog.

After our Santo Antao island tour we caught the ferry back to Mindelo with enough time for a quick refreshment on the ‘Marina Mindelo Floating Bar’ before the sun-set. 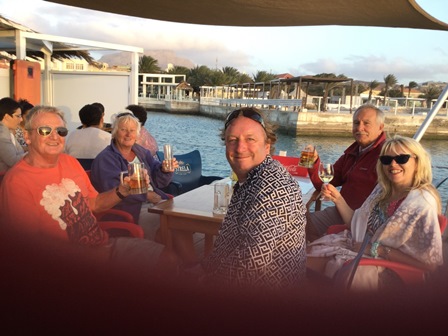 We'd changed ready to go for Dinner at a highly recommended restaurant (La Pergola) which was number two on TripAdvisor, however we assume that it must have been the Chef’s night off as it was dreadful. We returned to our hotel for night cap’s and to listen to some live music. The end of another busy day.


Tuesday was the day of the main Carnival, scheduled to commence at approximately 2pm.

After a leisurely breakfast we ambled along the sea front to the far end of the beach for a relaxing cool drink then back to the Hotel for lunch. After lunch the Ladies put on their flapper dresses and the Guys their Dinner Suit Tee Shirts, ready for the start of the Carnival. 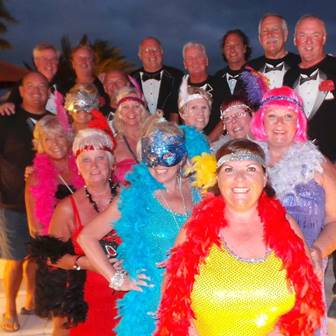 The route of the Carnival passed down the road where our two hotels were situated. We were all on the Balconies of the two hotels ready with refreshments in hand for the Carnival to commence. There was some impromptu Groups parading through the street prior to the main events. I understand that there were 5 Carnival Groups competing to be the best. The main event started approximately on time and the whole event ended around 6pm. Each group in excess of 100 people were truly amazing and some of the floats were on the same level with our second floor balcony. Clearly Carnival must mean a lot to the people of Sao Vicente as the extravagant costumes and props must have cost a lot of money, in what is quite a poor country. Here are some of the photos taken of the procession as it passed our hotel.


What a great event and all seen from hotel balconies of those who had rooms facing the main road, fantastic.

After the Carnival we all went to Simpatico Bar for a drink or two and then on to Restaurant Pont d'Agua for our evening meal, returning to the hotel for a nightcap or two before bed. 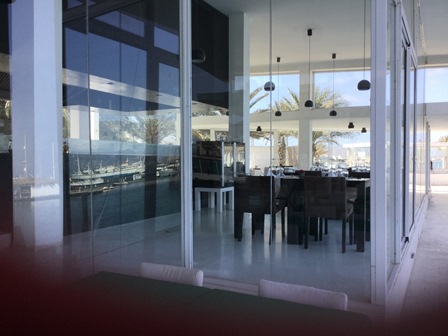 In the morning we could see that preparation was being made to present the prizes to the winners of the Carnival competition, from the five carnival groups that were competing for prizes.

We spent the day having a leisurely day strolling around Mindelo as we weren't due to be picked up from our hotel until 4p.m.

I had melancholy thoughts that the wonderful experience was over but pleased that as a group we bonded closer together and found some new friends. 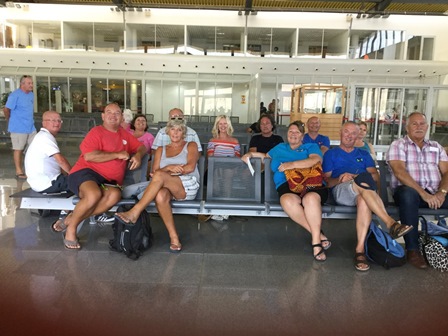 It is one of those wonderful experiences which you will remember the rest of your life.