The power of Paying Forward - by Dream Big (A.Foreman)

The power of Paying Forward

The power of Paying Forward - by Dream Big (A.Foreman)

I felt you were all due a long awaiting update from DREAM BIG. It's been an eventful summer and some truly incredible things have been happening.

Our first success is Arsenio Dias, known to most of you as Kukunha.

As most of you know Arsenio is not only an amazing Kitesurfer, he is also an Amazing person with a lovely way about him and a kind heart. He was featured in DREAM BIG’s first video ‘In The Footsteps of Legends’ viewable here : https://www.youtube.com/watch?v=m7kWI_mOMvA, when Maxime and Blandine were here on the island. Following this and coupled together with hard training and a lot of help from Mario Solari, Anne Rodda, Pietro “coach”and many others, Arsenio was offered a contract with RRD in 2017 which provided him with much needed equipment to continue his journey.

This equipment was brought out by Michelle Baines following a Facebook post by DREAM BIG and the transport was funded by your donations so thank you – if this hadn’t happened initially Arsenio’s adventure would not have happened this summer.

When the GKA competition came here in February donations to DREAM BIG were used to pay for the boys including Arsenio to enter the wild card event where they all really did us proud. Arsenio went on to join the main event and was placed well in the competition. Many thanks also to Kite Verde and Surf Hub Cabo Verde who set up a go fund me page along with DREAM BIG that was able to finance the next phase of the process. (https://www.gofundme.com/support-cabo-verdes-local-talent)

Mario then started the visa process for Arsenio and, with the help of your amazing donations we were able to pay for all the paperwork needed for submission (you won't believe how difficult it is for young CV athletes to get a visa to visit Europe or other countries).
After an agonising wait, we unbelievably got the visa and, Arsenio now had the chance to go to Europe to follow his dream and join the Global Kitesports Association (GKA) tour in Europe.

After a bit of a whirlwind Arsenio was off to Rome!!!! Thanks to NEOS (airline) for taking pity on us at the airport and reducing the board bag fee and also Monica and Enel Of 360° Sal who kept us updated. This was Arsenio first time on a plane and his first time out of Cape Verde. When I dropped him at the airport I was super nervous for him. Everything went well and he was met at the other end by Mario and his family and was able to spend some time sightseeing in Rome.

The next stop was Portugal for Arsenio's first competition away from Cape Verde. One of the most amazing things about being involved in watersports is the network of people you seem to be able to create across the world and this was one of those moments. A quick message to a good friend Tiago Rocha of Kookproof and Arsenio had a free ride from the airport and free accommodation for his trip amazing. We need to also mention Erica and Elvis at 100 Pedi Kite, Ines Correia and Airton for help and support. 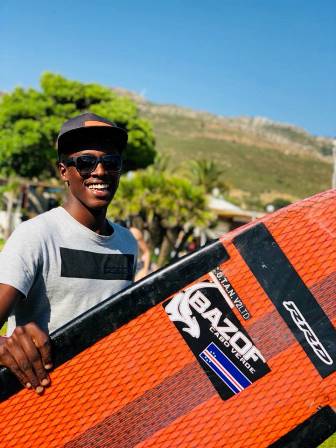 As part of his travels Arsenio also had the opportunity to go to the 2018 RRD Italian Demo Tour at Talamone in June and was lucky enough to be a guest by Roberto Ricci at a B&B. In August he was also a guest for 10 days at Ines Correia house in Caprarica. Two amazing experiences.

I don’t know about you but I think this is pretty amazing and it goes to show that what we say about the boys here in Cabo Verde is 100% TRUE!!! They are WORLD CLASSS ATHLETES and deserve THEIR opportunity to compete!!!!!!!!!!!!!!!